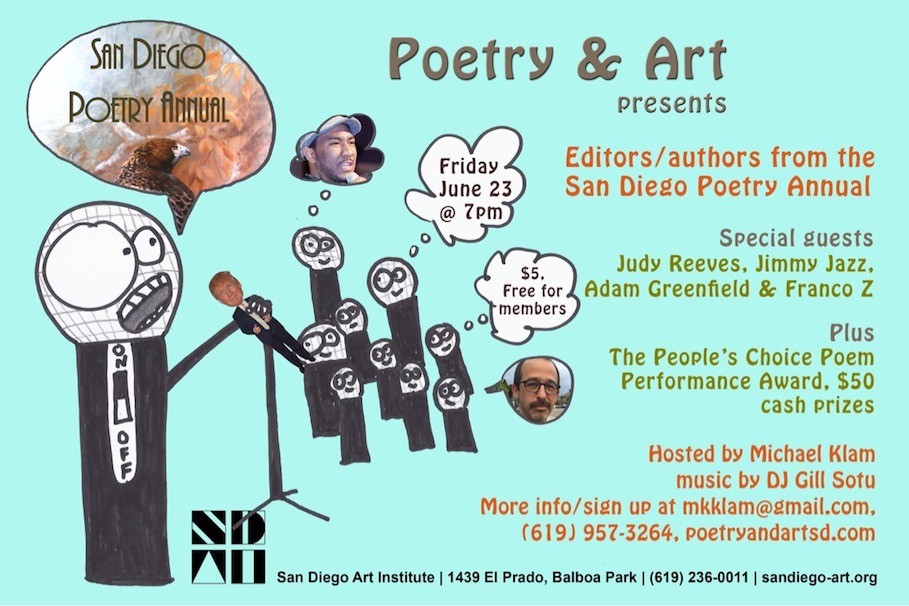 On Friday, June 23, Poetry & Art Series 2017 presents the 2017 San Diego Poetry Annual (SDPA).  Editors and authors published in the anthology read poems from this year’s edition. There will guest appearances by San Diego authors Anthony Blacksher, Judy Reeves, Adam Greenfield and Jimmy Jazz. Franco Z will perform A Brief History of Jazz.  People’s Choice Poem Performance Awards follow featured readings and performances.   DJ Gill Sotuwill provide music and sound throughout the show.  This interactive arts and culture experience will include beverages, snacks and plenty of time to mingle.Doors open at 6:30 p.m., and the show starts at 7 p.m. Members are free, nonmembers $5 at the door.  Bring a snack or beverage to share and get in free.  The event takes place in the San Diego Art Institute, 1439 El Prado, Balboa Park.

Judy Reeves is a writer, teacher, and writing practice provocateur.

Anthony Blacksher, known as Ant Black in performance poetry circles, recently earned a PhD from Claremont Graduate Unversity. He is a professor at San Bernardino Valley College. His performance poetry has been posted on YouTube and has appeared in the San Diego Poetry Annual. He serves on the board of directors of the San Diego Entertainment + Arts Guild (SDEAG), the local 501(c)(3) arts non-profit that sponsors the annual.

Jimmy Jazz is a writer from San Diego. He is the author of several novels including The Sub & The Cadillac Tramps. His latest work is called The Book of Books.

Adam Greenfield is a professional podcast producer and published poet based in San Diego, as well as the host of a monthly open-mic poetry event, Verbatim Poets Society. His collection of writing, “Regarding the Monkey,” was published in July 2015 by Puna Press and was culled from over 20 years of material. The book has quietly garnered critical acclaim from those that have purchased the book but are too blown away by its contents to say so. At least that’s what Adam keeps telling himself. You can purchase a copy of the book online at punapress.com and also at Verbatim Books in North Park.”

The People’s Choice Poem Performance Awards – Participants read/perform one poem under three minutes long. Audience members choose (by secret ballot) their favorite poem based on content and performance. Props, artwork, singing, music, dancing, all accompaniment is allowed and anything goes. Top poem performances (the poems that receive the most votes) win $50. Audience members will be encouraged to hoot for their favorites and try to influence the rest of the audience.

Writers/artists who would like to participate in the People’s Choice Poem Performance Awards can get their names in the hat ahead of time at mkklam@gmail.com or text 619-957-3264.  It is a good idea to sign up early by email or text message as space and time are limited!