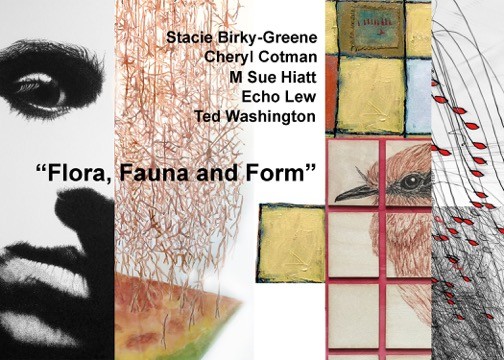 This exhibition of artwork features five dynamic artists presenting visual interpre- tations of the natural world and its interactions with humans. The work evokes sights and sounds using the colorful and vivid variety of California art. There are grids of ex- tinct and endangered birds, scientific worlds of data, of human striving and interaction along with dots and grids forming order from chaos and visual manipulations of light to music.

The muse of Stacie Birky-Greene is nature which embodies power and fragility. Her art explores the interaction of nature and man featuring endangered and extinct birds drawn on fragmented reclaimed wood rectangles.

Cheryl Cotman uses humor, unexpected juxtaposition and obsessive attention to detailed accuracy in her visual interpretations of the natural world. Her scientific back- ground and knowledge imbues her work. The viewer feasts on delicate pencil lines and lumps of color and form.

M. Sue Hiatt, a local South Bay resident, creates powerful, often large-scale paintings using a bold mix of media and imagery. Using a grid composition, her works display an unexpected fusion of the oriental and the occidental, evoking the mystery of the Far East yet reflecting the vivid, colorful tradition of California art.

Echo Lew manipulates lights in front of the camera to create “Light Drawings” that bring forth an expansive sense of flying over mountains, rivers, and oceans. Classi- cal symphonies most often shape these visions using the feelings evoked by the music. 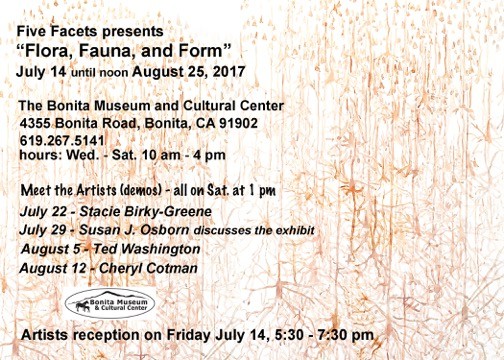