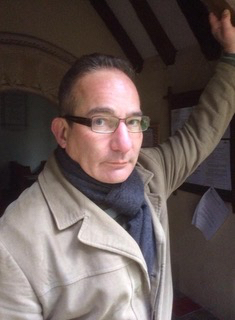 Palabra!
An Evening of poetry hosted by Ted Washington.

Native San Diegan Igor Goldkind is an author, poet and producer of advanced media technology innovations. At the age of 14, Goldkind served as a volunteer Science Fiction Coordinator for the now wildly popular San Diego Comic Con. It was in this capacity that he met Ray Bradbury, whom he asked for advice about becoming a writer. After living and working in Europe 30 years, he returned to San Diego in 2014 to care for his demented mother and see her to the valley beyond. In 2015, his multiple publishing project IS SHE AVAILABLE? was published by Chameleon and broke new ground in combining Poetry, Comics, Jazz and Animation. His imminent short story collection THE VILLAGE OF LIGHT based in the genre of Speculative Realism is to be published this year as well as his first novel entitled simply, PLAGUE.

The Chicago Tribune described Is She Available? as “an experiment, and reading it feels more like an act of discovery…nonetheless there’s a thrill to scrolling through its pages. It’s an ambitious step toward what digital media can (and will) be.”

In a different life Igor used to create and write characters for British Comics like 2000AD including the 4 series The Clown:
“Goldkind portrays the Clown as an “existential Mr. Magoo […] more fixated on his ideas about reality than reality itself” and credits The Sorrows of Young Werther as an inspiration for the series’s satirical, solipsistic “metaphysical slapstick”. Wikipedia [1]

After the featured reading we will have an open mic for anyone who wants to read. All talent levels are welcome.